In opening Avenue on the boardwalk in Long Branch in 2006, general manager Thierry Carrier, a French native, recalls, “Before we thought about anything else, we wanted a separate raw bar with seats where you could watch the guys shucking and could look out at the ocean.” Over the years, and especially in summer, Carrier says, about 40 percent of tables in the tall-windowed restaurant order something from the raw bar. There is much to choose from: Jersey clams and oysters, plus oysters from Maine and the West Coast. Happy hour prices and selections are generous. “In France,” says Carrier, “from the south to Bordeaux to Paris, you see raw bar plateaus in all the brasseries.” These are the towers that are the ne plus ultra of slurping. At Avenue, the petite plateau is $55, the grand is $85 and the royale, which serves six to eight people, is $135. It includes 12 oysters, 12 clams, 24 Prince Edward Island mussels, 8 jumbo shrimp, a whole chilled 1.5-pound lobster, four snow crab claws, an octopus salad, a conch salad and raw razor clams. Avenue also sells a lot of caviar, including Russian osetra at $135 an ounce. “It’s hard to come by,” Carrier says. “Somehow, people know we do. I’m always amazed, but it’s great.” —Eric Levin

Sunsets on the large outdoor deck are the main draw at this lively, attractive spot on the bay side of Wildwood. The dinner menu is on the pricey side, but the raw bar offers good value. The oyster sampler provides tastes of six different oysters; at our visit there were four from New Jersey, one from Prince Edward Island and one from Wellfleet, Massachusetts. We judged Jersey’s own Delaware Bay and Rose Cove selections to be the best. Also from the raw bar: Prussian Pearls (raw oysters with chilled vodka, sour cream, red onion and caviar); jumbo, lump crab cocktail; and oyster or shrimp shooters. There’s a long list of other tempting appetizers. On the specials list, we were thrilled to discover pacu ribs, a hard-to-find, easy-to-eat Brazilian fish dish slathered in a tangy mango sauce. —Ken Schlager

Overlooking the Shrewsbury River in the Channel Club Marina, Beach Tavern provides a nautical setting for oyster slurping. “It’s a good time here, especially at happy hour, when it’s packed,” says Beach Tavern’s Ken Mansfield. (Happy hours are extensive and run year-round, weekdays and weekends.) “It’s not a high-end thing; people are just excited to eat oysters and pair them with beer or prosecco.” Beach Tavern gets its oysters from Jersey’s Barnegat Oyster Collective. Its varieties include large, briny Wildling Bastards from Great Bay, north of Atlantic City, and BamBaLam Salts from Barnegat Light. The Tavern also serves oysters from Maryland, Connecticut and the West Coast, as well as clams from Virginia. Located on a back street, Beach Tavern has the feel of a hidden gem, because it’s not visible from the main drag, Ocean Avenue. Want max wow? Order the Yacht: The biggest seafood tower includes 12 oysters, 12 shrimp, 12 clams, king crab, a whole lobster and a bottle of 2014 Argyle prosecco for $150. —Emily Drew 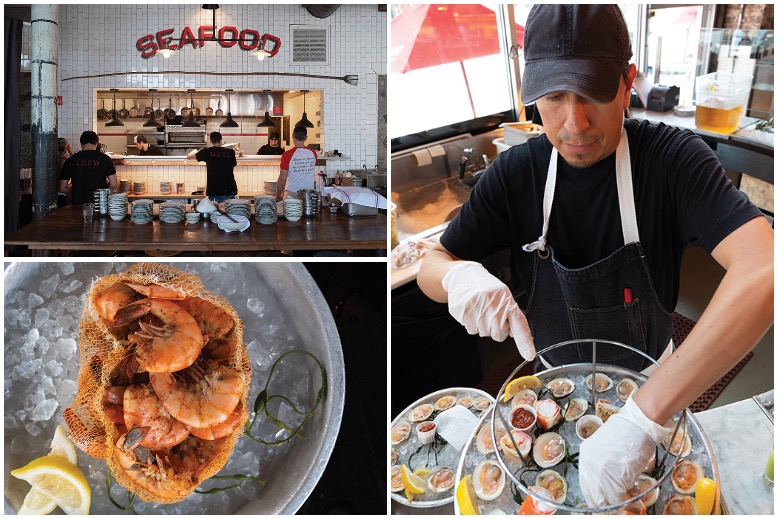 When Chef James Avery created the Bonney Read, his seafood restaurant, he placed the raw bar so it would be visible from the street and the first thing the customer passes when entering. “It’s like a stage,” he says. “There’s a little bit of theatrics, the professionals working there, carefully making sure not to spill a drop of the liquor when opening the oyster.” One may also see oystermen in muddy boots hauling in buckets of fresh product packed in ice from the coves of Barnegat Bay. “The oysters are tumbled in ice before shucking,” he says. “It wakes them up, and they stay plump.” The daily oyster stock will always include one West Coast (“a little creamier and silkier”); two East Coast (“more briny and minerally”); one wild, from New England or farther north; and one cultivated, from Barnegat Bay. Jersey clams are featured as well. “Our clams are wild, from Sandy Hook Bay,” Avery says. “They’re called Special Necks, a cross between top necks and middle necks. Some clams give you a copper-penny taste. Ours go through a triple purge process. They lose the copper taste but retain their brininess.” Bonney Read makes its own house mignonette and cocktail sauces. For its crab claws, it makes a yuzu-mustard sauce; for its chilled lobster and shrimp, a curry aioli. There is always a crudo, marinated in a bit of olive oil, citrus or acid, and some salt. Avery serves raw local scallops with an olive gremolata and Meyer lemon juice and raw albacore tuna with a squeeze of fresh grapefruit and some olive oil. Then there are shooters: an oyster in a shot glass with a hit of spiked gazpacho. Happy as a Clam Happy Hour is every night during summer. Sundays in the restaurant, it’s Bubbles & Pearls: a dozen oysters and a bottle of Champagne, from $35 to $85, depending on the bubbly. —EL A year-round hangout on Long Beach Island, Daymark has a lively bar scene, an upstairs room for weddings, and a particularly good raw bar focused on local product. “It helps that we get High Bar oysters literally from across the street,” says Brian Sabarese, who owns Daymark as well as the Arlington in Ship Bottom. “We get Viking Village scallops every day.” Opened in 2016 in the building that formerly housed Rick’s American Café, Daymark is bright and airy, with a tiled floor, a long stone bar, wooden booths and nautically themed wallpaper. It’s a full restaurant, but raw bar aficionados lean toward the daily selection of oysters from the Delaware and Barnegat bays. The staff will happily guide you. “Local [Barnegat] oysters are actually best for beginners,” says Sabarese, “because they’re smaller than Delaware Bay oysters. They’re nice and fresh and briny, and easier to swallow.” Local clams and bluefin tuna from Massachusetts also sell well at the bar. —ED

Opened in 1897, Dock’s has been sustained by four generations of the Dougherty family through world wars, the Great Depression, and the declines and rebirths of Atlantic City. Dock’s closed in 2015 for a multimillion-dollar renovation and expansion. What didn’t change with the 2016 reopening was the family’s commitment to fresh seafood. Behind the bar, chilled lobsters, oysters, clams and shrimp sparkle on ice below the chalkboard list of daily offerings. Oyster enthusiasts can count on about a dozen rotating selections that include Cape May Salts, Brigantine Salts, plump Chesapeake Bay oysters from Maryland, briny Wellfleets from Cape Cod, and Bluepoints and Barren Island oysters from New York State. You also can get littleneck or top neck clams on the half shell. During happy hour (4-6 pm, daily), select oysters are just $1 each. For a taste of everything, order the shellfish sampler, a tower of oysters, clams, shrimp, mussels, shrimp ceviche, crabmeat and chilled lobster ($34.50 for two people, $66 for four). —SV

The Dougherty family, who also own nearby Dock’s Oyster House, have combined the feel of a sports bar and a seafood shack right off the Boardwalk in Bally’s. The 20-foot raw bar cranks out multitiered samplers ($32 or $64). Oysters by the piece come from the Garden State’s Delaware and Great bays, as well as from the Chesapeake Bay, Long Island, and Virginia’s James and Rappahannock rivers. Other options include raw littleneck, top neck and cherrystone clams, shrimp ceviche, and tuna tartare in a lemon-soy dressing with blue and red corn tortilla chips in a wide cocktail glass. Bloody Mary oyster shooters are three for $12. Fish-of-the-day specials can be ordered grilled, pan roasted, fried or blackened. Grab an outdoor table on the patio, where at night there’s recorded music and lawn games like cornhole and giant Jenga. —SV

Don’t be scared by the typical hour-long waits for a summertime table here. That’s for the indoor restaurant. The open-air raw bar, on the other hand, is self-service, and tables turn quickly. I counted more than 80 along the dockside deck, which stretches the length of a football field into Cape May Harbor. The fishing boats and the 130-foot Schooner American tied up alongside add to the ambience. You can request one of 10 indoor, dockside tables with waitress service. Raw oysters from Shell Rock in the Delaware Bay and local clams are plump and fresh. (Cape May Salts are served only in the indoor restaurant.) Other offerings include barbecued clams (topped with bacon and sharp cheddar), u-peel shrimp, steamed mussels, and stone crab claws. Steamed lobsters are popular, and the dense, creamy crab soup is a specialty. —KS

Choices at Triton include, from bottom left: a beer flight from a large chalkboard list; a platter of clams, oysters and shrimp; a lobster roll. Photo by Paul S. Bartholomew

The clatter of shells, the clink of glasses and the chatter of a young crowd fill Triton, a happy-hour hot spot on LBI. Long pine tables with stools encourage conviviality among the young patrons, who tend to linger, partly because choices abound. Beer, for example. There are about 24 taps of craft beer and a good wine list to go with an on-site wine shop. But the main draws are local oysters and clams. On the chalkboard you’ll find the daily offering, which includes selections from far (Prince Edward Island mussels) as well as near. The house special is the Seafood Tower: 12 clams, 12 oysters, six shrimp and a 1-pound steamed lobster. Staff will help you pick a wine befitting your choice of oysters, perhaps a Muscadet or a sauvignon blanc. “We want to make the oyster-bar experience special, so you’re not just ordering a chardonnay out of habit,” says Tracey Battista, who owns Triton with her husband, Michael. “We love to turn people on to things they don’t know about.” —ED

In its third summer, this ambitious BYO’s commitment to fresh oysters now includes an oyster-farming co-op with the LBI-based Barnegat Oyster Collective. Their Oyster Saloon serves a locally farmed signature oyster, Parker’s Pearl—as well as various East Coast and West Coast oysters. Local middle neck clams are offered raw on the half shell. Hungry parties can go overboard with a Single Prop or Twin Screw mixed seafood tower. The Tuna Cracker combines raw yellowfin with citrus mayo and housemade crackers. Shareables include kettle shrimp, lobster corn dog, and disco fries with short-rib gravy. The lengthy menu features a fish house stew and other seafood classics, plus a selection of whole fish, lobster and meat dishes. Reservations are essential—especially if you want to catch the perfect sunset over Barnegat Bay. —KS

Much has changed since this oceanfront landmark opened in 1995. “I’ve definitely noticed that a raw bar menu is like a wine list now,” says manager Darrell Wordelmann, noting increased sophistication and curiosity among his customers. “It has to be detailed, because people like to pick out what’s hot.” Barnegat oysters sell well, as do bluepoints from New York and littleneck and top neck clams from Jersey. “What’s faded away is the fancy stuff,” Wordelmann says. “Razor clams have fallen off the map. King crabs have priced themselves off the market.” Fun is still on the menu, like the Bloody Mary with a Barnegat oyster pickle, celery and dehydrated olive. Look for more shooter options this summer. —ED

Three brothers opened Urie’s Fish Fry in 1956 as a paper-plate restaurant. Forty years later, the family sold it to a local restaurant group that renamed it Urie’s Waterfront. It faces the intracoastal waterway, so for sunset views and live music, grab a seat on the outdoor deck. Order a tray of clams or oysters on the half shell and a shrimp cocktail. Then move on to broiled stuffed shrimp or Maryland blue crabs, steamed and seasoned with Old Bay, and priced per crab. —SV