The Lookout's dining room boasts a panoramic view of the Delaware Bay. Photo by Ted Nghiem

Not long ago—any time prior to April, actually—no one would have had a reason to go to the ferry terminal in North Cape May unless they were taking the 90-minute ferry ride across the Delaware Bay. The terminal is miles from the Victorian quaintness of downtown Cape May and is not a particularly attractive structure. For security purposes, you may have to show ID and have your purse or backpack checked in order to enter the grounds.

But longtime Cape May publisher and restaurateur Jack Wright and his two partners are doing their darndest to make the terminal an imperative stop on any visitor’s list. Last year, the trio signed a 10-year lease with the Delaware River & Bay Authority for the rights to establish any food, spirit and retail enterprise on the terminal grounds, with two five-year options after the lease ends. They’re pumping $2.5 million or so into renovations. As of now, there’s a café, a bar with live acoustic music, an outpost of Wright’s popular Exit Zero Filling Station in downtown Cape May, and, as of late April, the Lookout, the fine-dining component of the plan. Entering the octagonal restaurant on the second floor, you can’t help but notice the panoramic view. No matter where you sit, you can take in the ferry, the whale-watching boats and other craft, plus the sweeping prospect over the water, scene of awe-inspiring sunsets. It is one of the best dining views anywhere on the Shore.

As the sun nears the horizon, many dash to the wraparound deck for selfies. The deck area has couches and fire pits and is suitable for lounging, but far too windy for a meal. A gust nearly claimed my martini glass. My friends were wise enough to keep theirs in hand. The popular Songbird cocktail sits in its signature glass. Photo by Ted Nghiem

Even when the forecast calls for less than picture-perfect weather, the scene is worth taking in. Alas, on my two visits the dining room itself lacked ambience as well as decent acoustics, forcing us to shout across the table over the too-loud playlist.

Wright acknowledges the acoustics problem and that the vibe in the room is generally off. “Before we got in here, this was a municipal event space, and it needed a lot of work and still needs work,” he says. “We may have opened in April, but we weren’t really done. We’re working on really softening the room.” While many of my dining experiences in the last year have been sullied by service lapses of one kind or another whether due to overworked or undertrained personnel, the staff at the Lookout is well trained, friendly, accommodating and knowledgeable about the menu, which has far more hits than misses.

Wright runs the show and the kitchen. The only item I was downright unhappy with was the two-tier seafood tower. It was visually appealing with its mounds of ice, seaweed, and both hot and cold shellfish. But for $110, I expected better quality and finesse—no mangled shucked oysters or clams casino that were more Red Lobster than fine dining. That said, the huge poached shrimp on the tower were divine. You can, and should, order those by themselves. At this time of year, when tomatoes are at their voluptuous peak, the tomato and burrata plate raises simplicity to the sublime. Standout entrées include the duck breast, which even earned the praise of my teenage son, who had never before ordered such an exotic protein, let alone medium rare. Plate cleaned.

The steaks are all substantial and worthy, as is the scallop entrée, a pretty plate complete with bacon lardons and squash purée. Wright says he intends to tweak the menu to make it more seafood focused, which makes sense given the waterside setting. 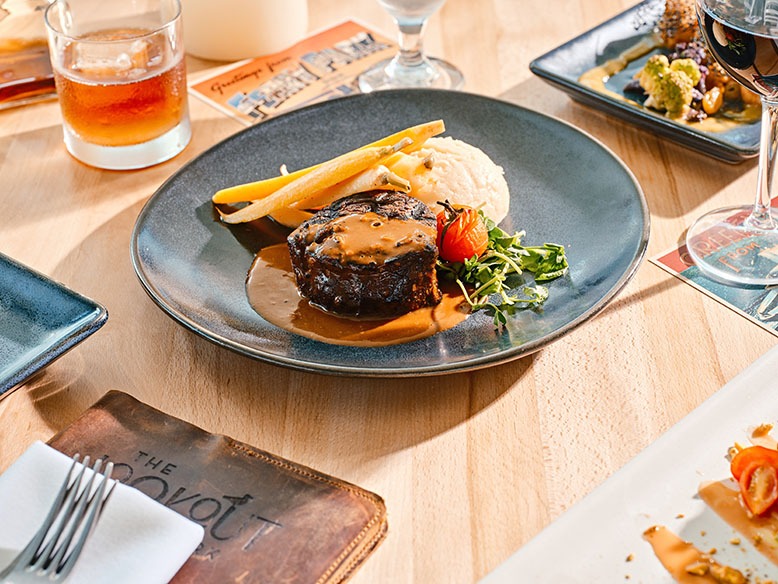 In the course of my two visits, we tried all four of the house-made desserts. I can recommend the classic renditions of the flourless chocolate cake and the créme brûlée, though our favorites were the sticky toffee pudding and the Key lime pie, desserts that here avoided the pitfall of over sweetness.

Also worth trying are some of the whimsical cocktail presentations. Never had a dragonfruit-infused-vodka and elderflower cocktail served in a bird-shaped glass with lavender and a sprig of bunny grass positioned like tailfeathers? You can do that here. It’s called the Songbird. There’s also the Shoal, a potent summery elixir composed of white tequila, mezcal, grapefruit liqueur, blue Curaçao, mole bitters and lime juice. Presented in a fish-shaped carafe, it serves a group.

It should be noted that dinner at the Lookout is not a casual undertaking in terms of price. A table of four moderately imbibing adults can easily rack up a $500 check, not including tip. The Lookout will, no doubt, become a popular spot for rehearsal dinners, micro-weddings and other celebrations. There certainly are kitchens of comparable quality in Cape May itself, often at more moderate prices. But what price to put on the perfect Instagrammable vista is for you to decide.