There are plenty of ways to get terrified at a restaurant: surprise corkage fee, dearth of gluten-free options, massive, intimidating wine list. But if you’re looking for a more old-fashioned scare, the Jersey restaurant scene has plenty of those, too. In honor of the Halloween season, we put together a little list of some of the Garden State’s ghostlier bars and restaurants. Among the themes that emerged: most of the ghosts are older (as in they passed into ghosthood in the 19th or early 20th centuries); hauntings are largely a bigger annoyance for staff (ain’t that always the case); and the Shore seems to have more supernatural activity than inland areas, which makes sense if you think about it—if you’re really forced to haunt New Jersey for an eternity, why not do it at the beach? Here’s a little peek at the paranormal side of Jersey drinking and dining.

Not a ghost so much as an inanimate object, but also one of the scarier things on the list. The so-called “Death Seat” at the Old Canal Inn actually has pretty innocent origins: back in the early 1960s, two 70-something customers would wait for the best seat in the house, neither of them particularly inclined to take turns. The vitriol supposedly got so bad that the seat itself must have become poisoned with hatred because both men ultimately suffered heart attacks within 10 days of sitting in it. Decades later the legend of the Death Seat lives on, with the seat chained up (sometimes with a skeleton on it) and its deadly powers are memorialized in a special burger—stuffed with jalapenos and deep fried to within an inch of your, er, its life. (Bonus points: they actually have a scary good craft beer list.)
2 East Passaic Ave, Nutley; 973-284-1272 By the looks of it—stately, nestled on the edge of Iona Lake, wide porch just screaming for a rocking chair, etc.—the Lake House is all charm. But dial the clock back some decades and you get rumors of a secret brothel, a Prohibition-era speakeasy, and an illegal fighting ring frequented by none other than Al Capone. Considering all the, er, unwholesome recreation, ghosts wouldn’t be a surprise. In fact the Lake House leans into it, boasting of its “bountiful supply of ghosts, spirits, and paranormal activity.” They even share the story of a young hotel clerk named Vincent who not only had the displeasure of discovering a dead hotel guest, but then (reasonably) went a little insane and was eventually killed during a shift while running from another, earlier Lake House ghost called “The Lady in Black.”
611 Taylor Road, Newfield; 856-694-5700

Emily’s Restaurant at the Flanders Hotel

By its name alone, the massive Flanders Hotel in Ocean City was bound to be haunted. Opened in 1923, it was named after Flanders Field in Belgium, the once blood-soaked final resting place of hundreds of thousands of soldiers in World War I. The ghost that’s said to haunt Flanders Hotel isn’t a soldier but a woman—Emily. In fact, the hotel restaurant is named after her, though her backstory is disputed. She’s either a rejected lover who committed suicide, a grieving mother eternally looking for her deceased daughter, or a bride searching maniacally for her lost engagement ring (which, let’s be real, is absolutely something worth haunting a place for). Whether or not Emily is really walking around bothering brides-to-be like some kind of paranormal Bridezilla, the hotel itself is very old, with plenty of history—worth exploring even when you’re not looking for a scare.
719 East 11th Street, Ocean City; 609-399-1000 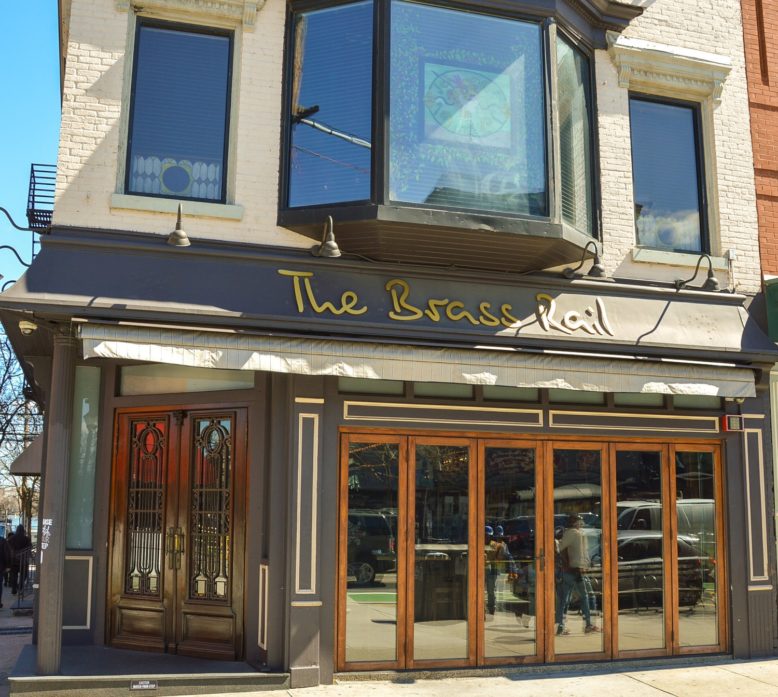 Photo courtesy of the Brass Rail.

Having a spiral staircase in a bar is basically asking for ghosts: you’re drinking, you’re (possibly) in heels, there’s an awesome banister to slide down, and boom: former bar patron turned ghost. To this day, however, the most famous ghost at this Hoboken mainstay isn’t a reckless, over-Mimosa-ed bruncher but a poor, doomed bride. The story goes she fell to her death from the top of those very stairs back in 1904. Her groom was so distraught, he drank inordinate quantities of alcohol and ultimately hung himself. However, as there are no recent sightings of either ghost bride or groom, the scariest thing you’ll probably see at a Brass Rail brunch is a Tinder date gone bad.
135 Washington Street, Hoboken; 201-659-7074

Another former brothel—Jersey had a few of these, it seems—so Gregory’s has some sordid tales of its own. But where ghosts are concerned, all activity stays squarely in the realm of “PG.” For instance, the door of the room above the bar where an old, now deceased Gregory family member Uncle Eddie used to live keeps on opening and closing by itself. (Management eventually took the door handle off.) Maybe slightly more menacingly, there are reports of dead managers showing up again only to give orders and disappear. Imagine getting halfway into cleaning the bathrooms only to realize you’d taken orders from a ghost with a bad habit of micromanaging.
900 Shore Road, Somers Point; 609-927-6665

With a name like Lucky Bones, well, you get it. Elaine’s is more easily the better-known haunted spot in Cape May (complete with a consumptive young female ghost named Reed and even their own spooky dinner theater productions) but Lucky Bones is a new addition to the shore town’s seemingly ample dose of supernatural activity. Characterized by its general manager as “a Cheers for ghosts,” Lucky Bones seems to be inhabited by good-times types, even if those times are happening in the afterlife. There aren’t major interruptions in the flow of business unless renovations are taking place, but typically the Lucky Bones crew are prone to giving goosebumps, vocalizing (more often than not by the pizza oven), walking with audible footsteps and opening the occasional door or two.