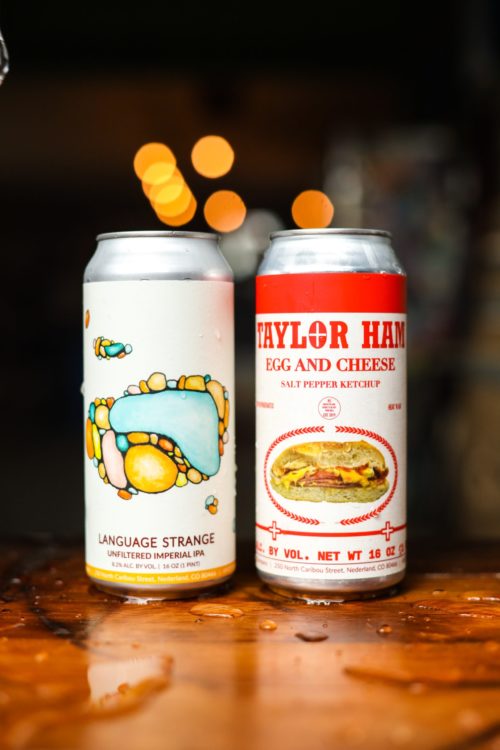 Early on the morning of August 8, patrons lined up outside a Colorado brewery for a new beer release. The anticipated beer—an 8 percent ABV unfiltered, double dry-hopped imperial IPA—was called the Taylor Ham, Egg and Cheese, Salt Pepper Ketchup. To help avoid any confusion, the brewery also offered patrons sandwiches of the same name.

For many who arrived at Knotted Root Brewing Company in Nederland, Colorado, it was the first time they had ever heard of pork roll or had the chance to taste New Jersey’s beloved breakfast meat.

Why was a small brewery 45 minutes northwest of Denver serving a Jersey delicacy and naming a beer after a sacred sandwich combination?

“I was born in North Plainfield and grew up in Gladstone,” says Chris Marchio, co-founder and head brewer at Knotted Root. “This is my homage to my Jersey roots and we thought it would be super fun.”

It’s important to note that the Knotted Root beer itself does not contain any meat, though other breweries have used it during the brewing process before. Instead, according to the label copy, it “features gobs of Motueka, Hallertau Blanc, and Vic Secret hops. This beer is dedicated to the salty, savory, oozing display of New Jersey’s best breakfast sandwich. We will always debate what it’s called, but we can all agree that it is something special. Think fresh squeezed American cheese, a poppy seed kaiser roll, and cured salted meats.”

The debate, of course, refers to age-old question of whether the meat product is “Taylor Ham” or “pork roll.” A large swath of North Jersey calls the meat Taylor Ham, thanks to the popularity of the John Taylor brand of pork roll. The rest of the state largely refers to the product, regardless of manufacturer, as pork roll.

Marchio has worked in beer for years, learning the trade at various breweries in Vermont, Washington and California before winding up in Colorado and starting his own with partners.

Still, a Jersey connection is never far off. Marchio says there is a deli in his town, owned by a former Garden State resident, that ships pork roll out to the Rocky Mountains and serves up sandwiches daily. Marchio bought out all of the deli’s supply (of the John Taylor brand) and before dawn on August 8 cooked up 40 sandwiches, wrapped them, and brought them to the brewery for the Taylor Ham-themed beer’s release. The sandwiches were sold along with $20 4-packs of the IPA with proceeds donated to the local foodbank.

According to Marchio, former New Jersey residents that now live in Colorado made the trek to the brewery that morning for a familiar taste of home. Once there, they were able to rock out to Ween and Bruce Springsteen over the brewery’s sound system.

For Colorado locals unaware of the sandwich before that celebratory morning, many who left told the brewers they would start seeking out the meat for future breakfasts.

Brewers have used meat (and meat-like products) to brew beers in the past, but it remains uncommon. Items like chicken parmesan and grilled beef hearts have been added to the brew kettle with varying results and reviews. Pork roll is no exception.

A few years ago Flying Fish Brewing Co., as part of its Exit Series, released a beer called Pork Roll Porter. “This deliciously dark brown caramel porter is enhanced by the addition of pork roll and spices in the brew kettle,” reads the label of the now retired rauchbier. “The aroma features notes of cocoa, with hints of maple and smoke from the peat-smoked barley. The flavor showcases characters of chocolate, maple, toasted nuts and a bit of spice from the pork roll.”

Knotted Root’s Marchio says the Taylor Ham beer will be an annual August release at the Colorado. His experience with its first release has renewed his desire to make a trip back to New Jersey for a proper breakfast at the Old Towne Deli in Boonton, his personal favorite. Maybe there will be a trip to Philadelphia as well, as the brewery previously released a cheesesteak homage beer.