Fill up on fries, savor custard on the boardwalk, dig into fresh seafood, and, above all, have fun while taste-testing your way around the area. We’ve included everything from classic treats that have been serving the Shore for decades to newer spots that have truly earned a place on our list.

And between bites, be sure to check out our list of the Jersey Shore’s best things to do that don’t involve a fork, knife or napkin.

Can you really say you’ve had Shore pizza if you’ve never eaten a slice at Pete & Elda’s? Many would say no. This Jersey Shore institution—which made our guide to the best pizza in New Jersey—has been slinging crispy thin-crust pies since 1961, when owner George Andretta’s father, Carmen, introduced food to the bar. If you dine here any time between Memorial Day and Labor Day, be prepared to wait in line, but know that it pays off. —Shelby Vittek
93 Summit Avenue, Neptune City • 732-774-6010 Another can’t-miss Shore spot for pizza is Rosie’s. Pies are special here thanks to technique and ingredients. Opened in 2017, Rosie’s boasts dough made with a naturally-fermented sourdough starter. The pies are cooked well done, resulting in delicious depth of flavor and a heavenly char. “People tell us they eat every last crumb,” says co-owner Mike Mercuro. Each day, only a certain number of pizzas are available, so call and order yours early. Once the pies are gone, they’re gone. “You just can’t force that dough,” Mercuro says. “You can’t snap your fingers and say ‘go.’” Both square and round pizzas are available, but no slices. Our suggestion? Get a regular round and a square topped with ’roni cups and vinegar peppers. —Georgia Kral
620 Bay Avenue, Point Pleasant • 732-746-3060

During this year’s Super Bowl, Bahrs scored a kind of touchdown when it appeared as the setting of a very popular Chevy Silverado commercial that featured Sopranos cast members. But Bahrs predates not only the Super Bowl but TV and even commercial radio. In 1917, the Bahrs family set up shop to sell chowder to fishing parties. Today’s menu is known for fresh seafood in generous portions. The Catch of the Day combo includes broiled fish, a pile of fried clams and two zesty stuffed clams known as Sandy Hook stuffies. Clams, steamed in their own broth, star in another summer favorite with linguine, lemon, white wine, basil and garlic. Nods to the family’s German heritage include potato pancakes and a soft pretzel with cheese sauce and mustard. The fourth generation, led by Ray and Jay Cosgrove, took over in 1974. The classic nautical décor remains, and the view of the marina and the bridge to Sandy Hook is compelling. For boaters, there’s even dock-and-dine. —Kelly-Jane Cotter
2 Bay Avenue, Highlands • 732-872-1247

You won’t see anything deep-fried at Spike’s. No French fries, no battered fish. The draw, every day except Thanksgiving and Christmas, is ultra-fresh broiled seafood, including flounder and scallops from off Point Pleasant Beach, served with a dash of paprika. The Broiled Trio adds Icelandic cod. Meals begin with bowls of crunchy cole slaw and rightly end with house-made pies: Key lime, Swedish apple with pecans, chocolate mousse and more. Owner Steven Weinstein greets you at the door, sometimes accompanied by a pre-teen granddaughter, who keeps track of the wait list. Children are invited to enter a weekly coloring contest for a slice of pie. No reservations. Indoor and outdoor seating. —KJC
415 Broadway, Point Pleasant Beach • 732-295-9400 The iconic custard from Kohr’s is creamier than ice cream. Photo by Jessica Orlowicz

No boardwalk venture is complete without a swirl of vanilla custard and orange sherbet on a cone from Kohr’s, in business since 1919, when three brothers set out to sell their frozen treats in Coney Island. The custard, made with eggs, is creamier and melts slower than its ice cream cousin. Today, there are dozens of stands up and down the Jersey Shore from Kohr’s Frozen Custard: The Original, Kohr’s Frozen Custard, and Kohr Brothers. The three companies are separate, each owned by descendants of the founding brothers. Each serves the same creamy custard, which is so good it made our guide to iconic ice cream spots at the Shore. —SV
Various locations

Since 1953, this Jersey Shore staple has been serving hot, fresh donuts 365 days a year. The homemade recipe for the sweet treats has been passed down for generations, with flavors including pistachio, chocolate, blueberry, and the staple sugar-raised donut (topped with cinnamon sugar). The donut shack opens at 5 am, but you had better get there early, as the hot spot sells out of its treats daily. Waiting in line is part of the experience. —Maggie Leenas
547 Fischer Boulevard, Toms River • 732-270-3882

Once a major fishing village, Sea Isle City is still home to a bounty of seafood markets and restaurants, many of which are located in an area along the town’s back bay known as Fish Alley. Through the enormous blue arch that reads “Welcome to Historic Fish Alley,” you’ll find Carmen’s Seafood, Mike’s Seafood, Marie’s Lobster House and Oar House Pub. Feast on fresh fish, crabs, shrimp and clams, then come back the next day and do it again. —SV Jilly’s runs on 50-pound cases of Idaho potatoes, delivered five times a week in summer. “If it’s a beautiful day, we’re going to blow right through them,” says Randy Levchuck, an owner. Three-step frying in baskets goes not by time, but “by look, feel and, especially, sound. When you shake the basket, if you don’t hear anything, it isn’t crispy yet.” A bucket is $11. Bring it back and the refill is $4.95. —Eric Levin
1034 Boardwalk, Ocean City • 609-385-1234

There’s only a small handful of people making mead, or honey wine, in the state of New Jersey, and Beach Bee Meadery is the only one doing so down the Shore. Opened in late 2019, the family-owned meadery is located a short walk from Pier Village in Long Branch. In the tasting room, you’ll find a variety of meads and ciders, flavored with everything from ginger and vanilla to cocoa nibs and chipotle peppers. —SV
89 Long Branch Avenue, Long Branch • 732-402-3558 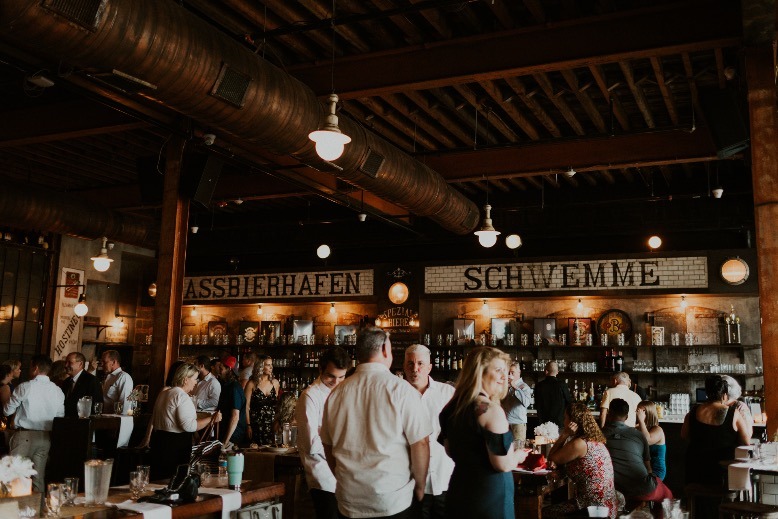 A trip to Asbury Park isn’t complete without a draught or two from the Asbury Festhalle & Biergarten (which is one of our favorite restaurants in Asbury Park). In addition to a wide variety of local and international stouts, ales and lagers served outside on the rooftop beer garden or inside in the communal-style hall, the German-themed menu, featuring bratwurst, kielbasa and smoked maple-bourbon-brined ribs, is not to be missed. Weekly entertainment, whisky and tequila tastings, rooftop comedy shows and family movie nights add to the summer fun. —Molly Gregor
527 Lake Avenue, Asbury Park • 732-997-8767

Since opening their first coffee shop in Oakhurst in 2010, Monmouth County natives Holly Migliacio and Shawn Kingsley have expanded their Rook Coffee empire to 11 locations in Monmouth and Ocean counties, as well as a roastery in Long Branch. The Shore coffee chain has gained a cult following—and for good reason. Rook’s cold brew—available in chicory-flavored New Orleans, chocolatey mocha and subtly spicy chai, plus other seasonal flavors—is some of the tastiest in the state. —SV
Various locations

This iconic yet humble home of submarines knows how to craft a solid sandwich. Founded by Anthony Basile in 1946, the sub shop has attracted a host of celebrities over the decades, including Frank Sinatra, Oprah Winfrey and even the Beatles, who visited after playing a concert in Atlantic City in 1964. The signature White House special comes with Genoa salami, ham, capicola, provolone cheese and toppings, and, like all their subs, is served on a fresh roll. White House’s original location and signage at Mississippi and Arctic avenues still stand, as does a newer output at the Hard Rock Hotel & Casino, opened in 2018. —SV


No one knows Jersey like we do. Sign up for one (or more!) of our newsletters here to get the best of the Shore and beyond sent to your inbox. For even more must-read stories, buy our June 2022 issue here.