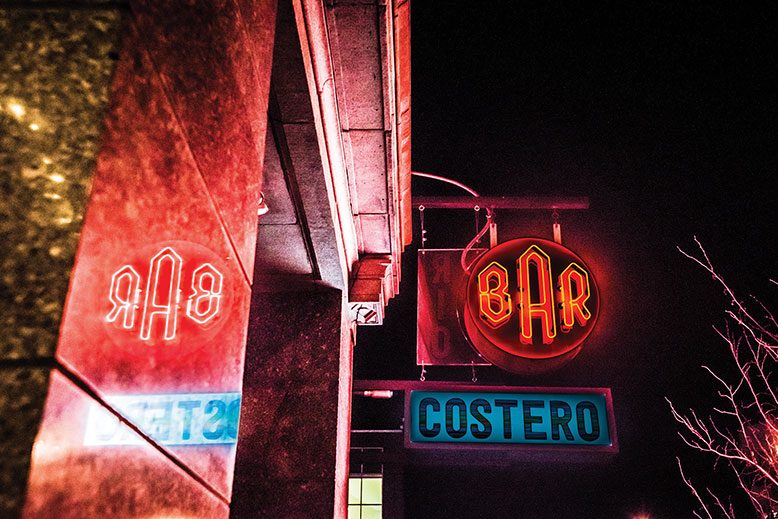 Whether your reference is Springsteen or the grinning face of Tillie the Clown, the words “Asbury Park” have a resonance perhaps no other Shore town can match. But nostalgia plays no role in Asbury’s current revival. Over the last decade, the restaurant scene has become one of the most dynamic in the state. The vibe is youthful, the choice of cuisines and interior designs wide-ranging. The boardwalk combined with Bangs and Cookman avenues amount to three bona fide restaurant rows, plus scattered spots also worth a visit.

Here are our top picks for the best restaurants in Asbury Park, in alphabetical order.

Ethiopian and Dominican food under one roof might not sound like it would work, but it’s a beautiful combination at Ada’s Gojjo. Chef Adanesh Ashghedom first learned to cook Dominican food while working at Ada’s Latin Flavor in Long Branch, even though her native cuisine was Ethiopian. At the end of 2018, she moved into a bright, beautiful space in Asbury Park, renaming the restaurant Ada’s Gojjo. Her cooking style has also evolved, with the menu now split between Ethiopian dishes like doro wot and classic Dominican dishes like mofongo and empanadas. BYO.
1301 Memorial Drive, 732-222-5005

In summer there is no better perch than the rooftop garden, but wherever you settle in this atmospheric evocation of an early 20th century Austro-Hungarian beer garden, you will revel in the roster of draft beers, wursts, schnitzels, potato pancakes, smoked trout, sauerbraten and strudel.
527 Lake Avenue, 732-997-8767 A hit since it opened in 2016, Barrio Costero modernizes Mexican food in a way that is hip, colorful and, most of all, bursting with bold, harmonious flavors. The cocktails take this theme to heights of their own. The menu ranges from beef cheek tacos with grilled pineapple to a plate of scallops with black quinoa, golden raisins and chimichurri.
610 Bangs Avenue, 732-455-5544

“Opening another restaurant was the last thing I thought I’d be doing,” says James Avery, looking back at last summer. “But if there was anywhere people would gravitate, a place they’d say, ‘Let’s get back out in public,’ it would be this.”

He had found the perfect space, a historic building that had served as the city’s post office, a bank and, more recently, Modine restaurant. The gamble has paid off, and the 170-seat restaurant—which made our list of Best New Restaurants—is packed most weekend nights and for Sunday brunch, with patrons choosing among the sporty bar, the high-ceilinged dining room, a window-lined alcove called the tea room, and the former bank’s vault, which Avery refers to as the snug.

“Every pub has one—a place you go to have conversations you don’t want others to hear,” says Avery.

Opening a British pub seemed an obvious choice for this native of Spring Lake, which some refer to as the Irish Riviera, and indeed, the idea had been percolating for several years for this chef of Irish descent. Avery did his homework, traveling to gastropubs throughout Britain and Europe to amass design and menu ideas. He borrowed the popular flower-laden mantels that shroud the doors of many British pubs. A tall, silk cherry tree dominates the dining room, while vines of silk wisteria trail throughout.

For the British dishes, Avery says “the backbone of the recipes come from working with Gordon Ramsay,” on whose FOX shows, Hell’s Kitchen and Kitchen Nightmares, Avery has been a regular. He puts his own twists on these, adding a hint of curry to the breaded coating on the fish and being more lamb forward with the shepherd’s pie.

Avery calls himself a Jersey Shore guy. The Black Swan joins his other Asbury Park restaurant, the Bonney Read, and he has previously served as executive chef of Asbury Festhalle and Biergarten. Now 40, Avery, who lives in Wall with his wife and four children, says his goal is to have 10 restaurants by the time he’s 50. “I’ve got 10 years and eight restaurants to go,” he says. —Jill P. Capuzzo
601 Mattison Avenue, 732-361-7159 The Bonney Read shows off a large display of shrimp, oysters and lobster on ice. Photo by Paul S. Bartholomew

The big raw bar is right by the front door, and the shuckers at the Bonney Read are always busy. But there is much more to this contemporary seafood house. Chef James Avery does a “Jersey Green” clam chowder with green pepper, fennel and sausage, as well as a classic New England one. There’s Cajun shrimp, clams casino, a grilled catch of the day—and, yes, a hefty burger should you want one.
525 Cookman Avenue, 732-455-3352

Spring Lake natives Laura Brahn and Grace Crossman met while working at nearby Porta. They later worked at other restaurants before starting a catering company together. In 2016, they opened the charming and rustic Cardinal Provisions. At first they served just breakfast and lunch; in 2018 they began offering dinner on Friday and Saturday nights, with a new dinner theme each weekend. During weekend brunch, the restaurant is usually packed, with crowds waiting outside for a table. Try the cacio e pepe scrambled eggs. BYO.
513 Bangs Avenue, 732-898-7194

Since 2008, this vibrant beachfront restaurant has offered a crowd-pleasing menu featuring local ingredients that touch all bases. There are paninis, pizza, a burger, edamame, sushi and a kale Caesar—plus beer, wine, cocktails and Sunday brunch.
1000 N. Ocean Ave, 732-455-3275

Jalisco, where Tapatia owner German Garcia was born and raised, includes the city of Tequila—and you’ll have many of those agave liquors to choose from at your table or the bar. The menu, mostly Pueblan, includes excellent tamales, chunky guacamole, and carnitas and lengue tacos. Garcia began in 1998 with a small grocery, which he later turned into Plaza Tapatia (formerly La Tapatia)—one of the best Mexican restaurants in the state. Now the family’s domain covers half a block, encompassing a large grocery, bakery, liquor store and taqueria.
707 Main Street, 732-776-7826

All the cooking is done in the 1,700-pound, Mugnaini wood-burning oven that chef-owners Lauren Castellini and Aimay McElroy installed in the corner of what was once a garage. Castellini starts most days roasting tomatoes and slow-cooking pork, while McElroy nurses into being the sumptuous dough for bread and pizza. There are a couple salads and sandwiches—but crisp, deliciously blistered pizzas are the main event. No reservations. BYO.
711 4th Avenue, 732-361-3061

Smith, the company that almost singlehandedly rebooted Asbury Park’s restaurant scene with the earthy Brickwall Tavern and Porta, went upscale French with Pascal & Sabine. And they pulled it off: Not only is it their most elegant and comfortable restaurant, but it also just might be Asbury Park’s. The bar is great for hanging out; the huge, circular booths are something to experience; and the brasserie-style food is persuasive.
601 Bangs Avenue, 732-774-3395 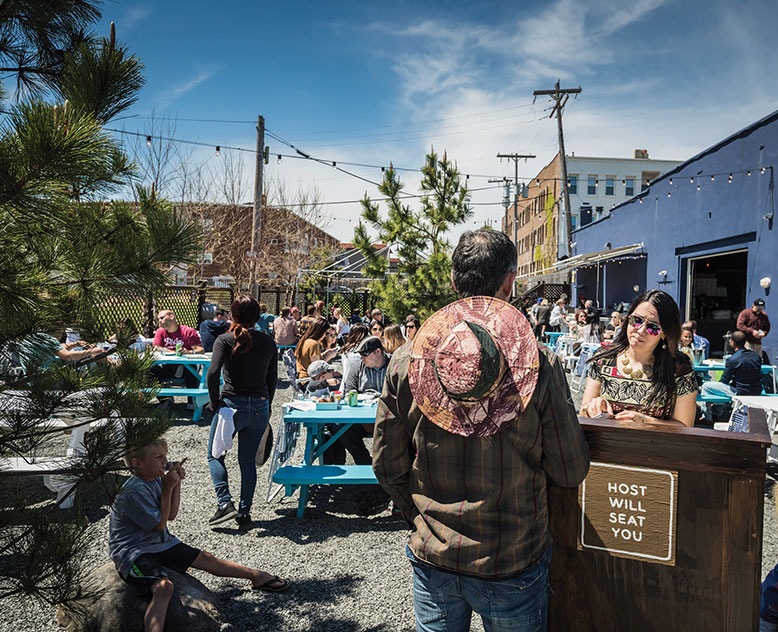 Patio seating at Porta buzzes when the weather’s nice. Photo by Jim Connolly

Yes, this was where the Boss first met Clarence Clemons, back when this cavernous space was the Student Prince. In 2011, Smith redesigned and reinvented it as an homage to Neapolitan pizza. But the menu also offers arancini, salads, roasted vegetables, pastas, branzino and rack of lamb.
911 Kingsley Street, 732-776-7661

Three Shore natives who have a thing for New Orleans food and style bought the former nightclub Cascada in 2018 and, after off-and-on construction, finally opened R Bar in December. (It made our Best New Restaurants list a few months later.) Chef Michael Feinberg, who worked for Marc Forgione at American Cut in Atlantic City, ranges from crab beignets to deviled eggs under a blizzard of shaved Parmesan to a worthy burger. There’s a vest-pocket stage from which, recently, a deft jazz trio held forth. What’s in the name? “We’ve opened so many restaurants for others,” says partner Casey Richards, “that we decided this one would be ours, so it’s R Bar.”
1114 Main Street, 732-776-7463

The team that modernized Mexican food at Barrio Costero launched Reyla in 2018 to do the same for Middle Eastern cooking. By the end of the year, they had broadened the culinary concept and created a new menu of small but shareable plates—ranging from lamb burgers with tzatziki to octopus with green coconut chutney to three types of hummus. Cocktails, tailored to the concept, are lively.
603 Mattison Avenue, 732-455-8333 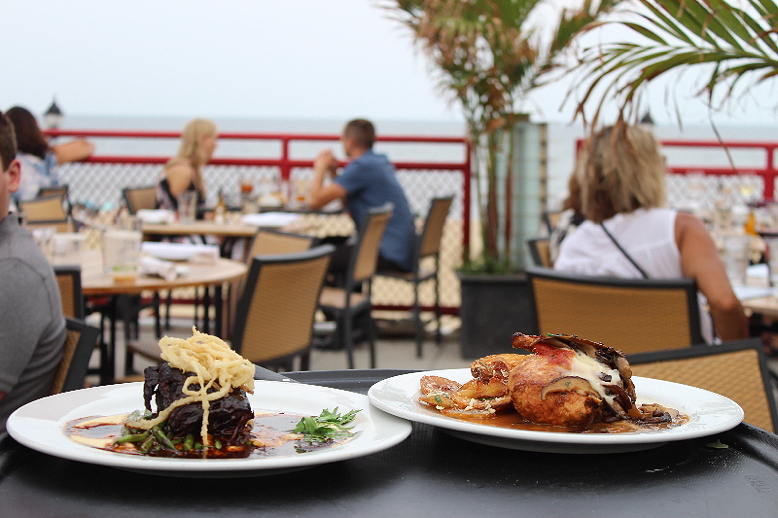 In a city with so many restaurants and cuisines, it’s surprising that there is just one Japanese eatery. Taka is the real thing—in food, drink and atmosphere. Its chef and founder, Takahiro Hirai, was born in Japan, where he earned a degree in economics. After working in sushi restaurants in Miami Beach and Nantucket, he opened Taka in 2000. It offers both sushi and cooked items, as well as one of the largest selections of Japanese whisky and sake in the area. One sake is made just for the restaurant near Hirai’s hometown.
660 Cookman Avenue, 732-775-1020 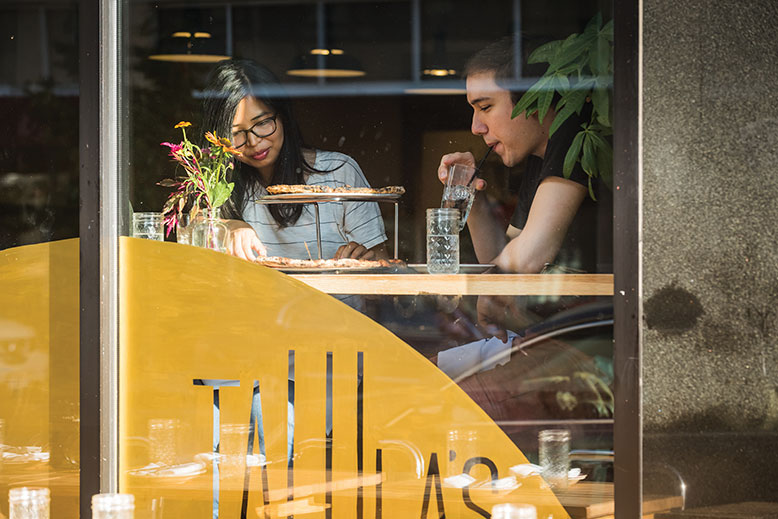 Husband and wife Steve and Shanti Mignogna’s sourdough crust has pizza lovers in ferment. Their pies, baked in a gas-fired stone hearth, are thin yet hearty, with puffy, charred crusts—and are among the best in the state. The New Yorker pie distinctively combines fresh and aged mozzarella with aged provolone. The Dolorian, a witty brunch pie, is topped with smoked salmon, hash browns, crema, capers, scallions and dill. Whatever the toppings, the foundation is what raises Talula’s to the heights. Sandwiches on their sourdough bread, a list of natural wines and hip cocktails, and fresh-baked pastries also contribute to lines out the door.
550 Cookman Avenue, 732-455-3003