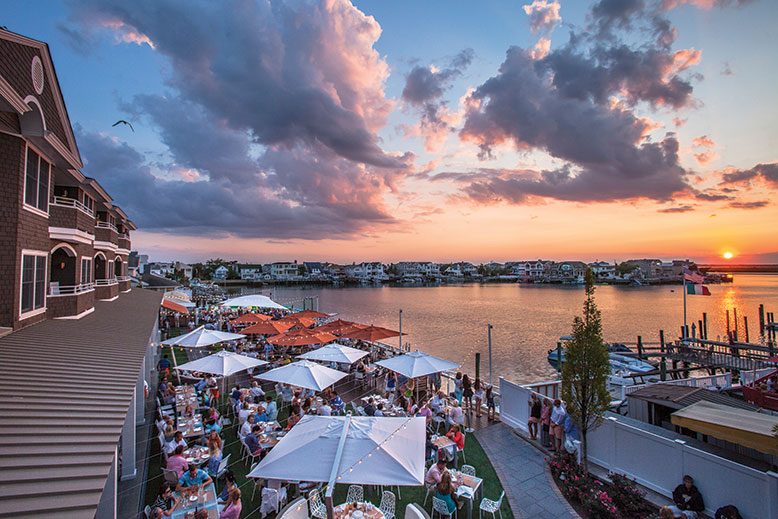 Sunset attracts big crowds at the Water Star Grille, one of two restaurants at the Reeds in Stone Harbor. Some come to dine; others opt for cocktails at the bar at the far end of the spacious harborside deck.
Photo by Marc Steiner

It’s hard to imagine a better place to view a Jersey Shore sunset than the Water Star Grille. Perched on a little bay in the center of Stone Harbor, the open-air restaurant attracts a nightly crowd of vacationers to its spacious bar and dining deck. To the west, the setting sun paints the sky red and gold  as it slips into Delaware Bay.

The Water Star Grille is one of two restaurants at the Reeds at Shelter Haven, a three-year-old boutique hotel that has given this South Jersey beach town something it lacked for decades: a high-end resort. The small property—it has just 37 rooms and suites—fits unobtrusively into Stone Harbor’s lively downtown shopping and dining district.

Even the competition views the Reeds as a welcome addition. “They’re great for the town,” says Susan Cawley, general manager of the family-oriented Concord Suites in neighboring Avalon. “It’s got a nice, upscale atmosphere that was really needed.”

Stone Harbor is one of two well-heeled, largely residential towns on Seven Mile Island, a wisp of land not more than five blocks at its widest. Avalon occupies the northern part of the island, blending seamlessly with Stone Harbor to the south. Both towns boast an ample supply of rental properties, but there are only a dozen hotels or motels on the island. Only two—both in Avalon—are oceanfront.

The Reeds is two-and-a-half blocks from the ocean, but makes up for its inland location by whisking guests to the beach in a pair of battery-powered GEM cars. The six-seat, low-speed vehicles are really elongated golf carts. A Reeds attendant greets guests at the beach and provides the hotel’s signature tangerine-colored beach umbrellas, chairs and towels. The service is complimentary.

That’s just a sample of the pampering promised by the Reeds, where summertime accommodations range from $379 to $899. Rooms, including several spacious “celebration” suites, are tastefully appointed and generously equipped with luxury amenities. Throughout the Reeds, the design aesthetic is chic and casual, with soothing coastal colors and warm, burnished surfaces.

The Reeds was built on the site of the landmark Shelter Haven Hotel, a green-roofed Victorian that opened its doors in 1912, but was demolished in the 1960s to make way for the forgettable Shelter Haven Motel. The motel, too, fell to the wrecking ball, and the property was a vacant eyesore until the Reeds opened in 2013.

The footprint for the Reeds is somewhat confined, but management plans to expand at some point to an adjacent property and one across the street. That could mean additional amenities, such as a spa, which the Reeds currently lacks. For now, guests relax at the small, secluded rooftop lounge with its soaking pool and twin hot tubs. Early mornings, guests can enjoy free yoga classes on the rooftop to the soundtrack of seagulls squawking overhead.

Step out of the Reeds lobby and you are at the corner of 3rd Avenue and 96th Street, the core of downtown Stone Harbor. The area is perfect for strolling, especially on summer evenings. Boutiques, galleries, gift shops and eateries line the downtown sidewalks, where tiny lights twinkle in the trees. Attractions include a five-screen movie house and several rooftop mini-golf courses for the kids. Hands down, the most popular spot is Springer’s (9420 Third Avenue), where vacationers queue up after dinner for homemade ice cream. The wait can be long—some opt for the shorter wait at the nearby Kohr Brothers (274 96th Street)—but for regulars, the line at Springer’s is the nexus of the Stone Harbor social scene.

Stone Harbor mornings mean a visit to Coffee Talk (299 97th Street), where vacationers order locally roasted coffees, fresh-baked goods and breakfast sandwiches at the counter, and then seat themselves at an indoor table or sunny outdoor bench. “We do 350 breakfast sandwiches on a good summer morning and endless cups of coffee. It’s insane,” says Madlynn Zurawski, who started the business 20 years ago. A juice bar shares a corner of the cozy space.

Got a sweet tooth? Stone Harbor regulars swear by the sticky buns at the Bread and Cheese Cupboard (246 96th Street). They come good and gooey, fresh from the oven, but be forewarned:  On any summer weekend, they sell out long before noon.

Lunch standbys include Fred’s Tavern (314 96th Street) for burgers, salads and sandwiches, and Concord Café in Avalon (7800 Dune Drive), a comfortable spot for burgers, pizza and pasta. Or head to the beach with a cooler full of creatively constructed sandwiches from Yvette’s (221 96th Street).

Seven Mile Island’s beachfront is attractive and clean, with some of the Shore’s finest white sand.  Looking for a boardwalk? You won’t find one here. Stone Harbor and Avalon vacationers prefer the low-key vibe, although they might not be crazy about the scant supply of rest rooms. Both towns honor each other’s beach tags (daily, $6; weekly, $12; seasonal, $27).

For day-trippers, a choice stretch of beach is the area where the two towns meet at 80th Street. Parking is ample and free, and beach access is easy. Best of all, you can avail yourself of the public amenities at Avalon’s two oceanfront hotels, Windrift and its neighbor, the Golden Inn. Stroll off the beach at 80th Street and you can step into one of Windrift’s several oceanview bars or its sun-bathed Level 2 restaurant. The atmosphere is casual, the reasonably priced lunch and dinner menus include brick-oven pizzas and fresh-made sushi, and the ocean view is among the best on the Jersey Shore.  Similarly inviting is the Golden Inn’s Sandbar, where drinks, salads, sandwiches and flat breads are served from a tiki hut nestled behind the dunes at 78th Street. (Read more about where to stay on Seven Mile Island.)

There are plenty of activities away from the beach. A bike lane runs the length of Second Avenue (in Stone Harbor) and Dune Drive (in Avalon). Traffic is minimal and bike rentals easy to find. Ambitious riders can stretch their trek north over Townsend’s Inlet to Sea Isle City, or south on a breezy causeway through a wide and scenic salt marsh all the way to the Wildwoods.

Natural attractions are a big part of the Stone Harbor experience. Chief among them is the Wetlands Institute in Stone Harbor. A nonprofit dedicated to sustaining healthy wetlands and coastal ecosystems, the institute has educational programs, events and displays for kids. Raised paths for nature hikes provide a bird’s-eye view of the surrounding wetlands. This is also the starting point for back-bay boat rides and kayak tours.

Dinner options abound. Stone Harbor’s star attractions include old standby Jay’s on Third; new favorite Spiaggetta; and the Reeds’ two dining destinations, Water Star Grille and Sax at the Reeds. On the funkier side is Quahog’s Seafood Shack, where the ramshackle exterior belies a memorable dining experience. In Avalon, The Diving Horse is winning raves, and Princeton Bar & Grill and its neighbor, Circle Tavern at the Princeton, are local favorites for dining and mingling. (Read more about dining in Stone Harbor and Avalon.)

Dinner in Avalon is often followed by a stop at Avalon Freeze, a retro-style ice cream hut in the center of town. It’s no surprise that vacationers keep coming back to places like Avalon Freeze and  Springer’s. Like other beloved Jersey Shore destinations, Seven Mile Island is a magnet for families to return again and again.

Denise Pfaltzgraff, whose family has owned the Lark Motel in Stone Harbor since 1967, bears witness to the island’s allure. “I grew up here,” says Pfaltzgraff. “Now the people that came here when I was growing up are bringing their kids. Those kids are playing and swimming with my kids.”

Meanwhile, at the Reeds, general manager John Daily and his team are creating a new Stone Harbor tradition of luxury and pampering. “They’ve gone so far above and beyond our expectations, it’s crazy,” says Meaghan Delmonico, a first-time guest at the Reeds, as she enjoys the beach with her son, 4-year-old Julius. “They just seem to accommodate whatever you are asking for,” adds the Millburn mom.

Not that you could ask for much more than a vacation in Stone Harbor or Avalon.