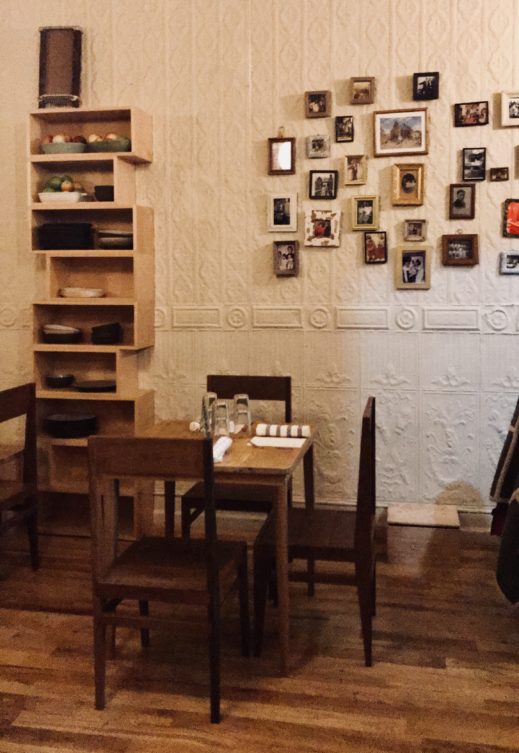 Drew Buzzio knew exactly the kind of Italian restaurant he wanted to open. It would be cozy, no frills Italian fare cooked with locally sourced ingredients. The question was, where? Buzzio and his partners Marc Magliozzi and Peter Fontana searched extensively for the perfect space, but couldn’t stomach the exorbitant rents in Hoboken or downtown Jersey City.

Four years later, in the rapidly developing Jersey City Heights neighborhood, it was a bedraggled former bodega that made all three “immediately fall in love.” In the Palisade Avenue spot, stripped to its original tin walls, filled with custom-made wooden tables and tethered by a glowing open kitchen, the trio now run Corto. And the location, Buzzio says, has driven six-month-old Corto’s success.

The lower rent, for one, “is part of the reason we can do what we do,” which he says includes changing the menu frequently, running Corto as a BYO and offering what Buzzio describes as “cucina povera.” Meaning “poor kitchen” in Italian. “Food does not need to be overly complex if you use really good ingredients,” says Buzzio.

Directing the use of these ingredients is chef Matt Moschella, who worked as the corporate chef for the Harvest Restaurant Group for nearly a decade. His offerings at Corto are slim but ambitious; there were just three entrees the night of our visit, plus five starters and the same number of house-made pastas. We started with the daily meat and cheese selection ($19). Presented in an artful tower, it included two cheeses, a creamy robiola bosnia and a harder, sharper grana padano, and super thin slices of salumi. Our favorite of the three meats was the spicy finocchiona, but all were sourced from Buzzio’s family’s artisan salumi business, Salumeria Biellese, based in Hackensack. Our other starter, a polenta with local maitake mushrooms, thyme and mascarpone ($13), was a bit salty, but comforting, creamy and nutty.

The highlight of the meal for my dinner companions and I were the house-made pastas, and we’re apparently not alone—Buzzio estimates the kitchen churns out around 15 pounds of fresh pasta on a busy night (the restaurant actually outgrew its original pasta machine just a few weeks after opening). Fettucine in a ragu-like sauce, above, and lumache al forno at Corto. Photo by Sophia F. Gottfried

Featuring some classic pasta shapes, such as fettuccine and ravioli, Corto also offered others that were refreshingly new to a table of pasta lovers: malfadini, lumache, spaccatelli. Half portions were available for most pastas, great for sharing and trying as many pastas as possible, an admirable goal. The fettucine ($16 for half portion, $24 for entree size) came lightly dressed in a ragu-like sauce that was packed with flavorful mint and calabrian chili. The lumache al forno ($16), a sort of mac and cheese and lasagna fusion, was served in a small, colorful ramekin with a crispy broiled top. Lumache means “snail,” and the amped up shell shape stood up well to the fior di latte cheese, similar to a mozzarella and made in house.

Less exciting in comparison, but solid nonetheless, were our entrees: the Angry Chicken, a rare menu mainstay, in a juicy tomato, chili, garlic sauce ($18) and the whole sea bream with a salsa verde, lemon and more local mushrooms ($22). The Corto menu not only changes quickly, Buzzio points out, but also draws inspiration from all over Italy: His own family hails from northern Italy, while co-owners Magliozzi (who owns artisan pizza shop Dozzino in Hoboken) and Fontana’s are from Rome and the Adriatic Coast, respectively, and chef Moschella’s heritage is Sicilian. Recently, Corto started a weekend lunch service featuring a lightened up version of their dinner spread.

Setting up shop in the Heights has also established Corto as a go-to neighborhood destination, Buzzio says. A handful of eateries—hip coffeeshop Mod Cup, quaint brunch joint the Cliff and trendy bar and Detroit-style pizza place Lo-Fi—have opened in recent years. But despite the influx of young people priced out of downtown and young families moving to the area, there aren’t many traditional dinner destinations yet. Newcomers and longtime residents alike, Buzzio says, have expressed their gratitude to have a place like Corto within walking distance. The waitstaff all lives in the area, and even chef Moschella bikes over from his home a few blocks away.

But “the cat’s already out of the bag,” according to Buzzio, whose team has heard of many restaurants looking to open in the area (and during our visit, several groups of diners had come to the Heights from downtown Jersey City or from Hoboken for an evening out at Corto). Still, he says, there are “plenty of seats at the table for everybody to eat,” and Corto is just “happy to be a part of it and plant our flag.”