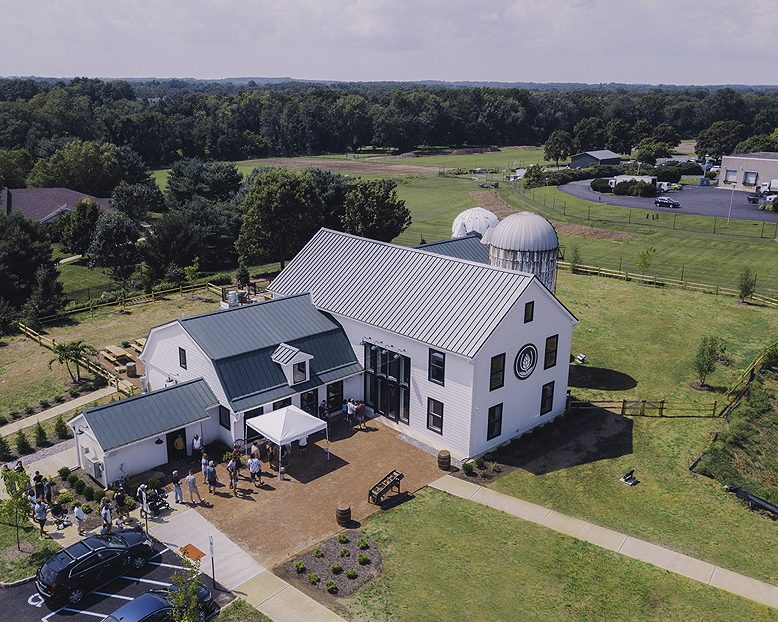 Philip Petracca may have built a career in commercial tech, but he ended up following his passion to a life in farmhouse brewing. It wasn’t actually a major leap from tech to craft: Petracca’s the innovator behind the Fizzics DraftPour, a portable beer-pouring system that can turn any beer into a nitro-style draft. (He and partner David McDonald even net a $2 million deal on “Shark Tank.”) Making the switch to brewing was a natural next step for Petracca, who opened Source Farmhouse Brewing in a 19th century farmhouse in a very bucolic corner of Colts Neck just over a month ago. As the name suggests, Source is all about, well, its sources, and uses everything from a custom-dug aquifer channeling water from the Poconos to local berries, corn, and honey to Jersey-harvested yeast (stay tuned). The result are beers with charming idiosyncrasies and even a sense of terroir—served by staff with Cicerone certifications. We caught up with Petracca to ask about the brewery’s sourcing practices, why a niche brewery would champion lager over craft-darling ale, and if we’ll ever find Source beer outside of Colts Neck.

Table Hopping: You could say you already made your mark in beer with Fizzics. How do you end up with a boutique farmhouse brewery?
Philip Petracca: I’ve always had fantasies of opening a brewery. With Fizzics, I was able to interact with breweries all across the world, formulating my concept.

TH: Why Colts Neck?
PP: Colts Neck was always at the top of my list. We knew we wanted to be closely tied to a town with a strong foundation in agriculture. For a lot of our beers, we actually go to the farm. Our brewers will go harvest at the farm, with the farmers, every week. They show us what’s growing or even what’s wild on their property.

We launched with a beer called Colts Nektar IPA. We wanted that beer in particular to show the essence of Colts Neck—and what better way than 150 pounds of local wildflower honey? Our head brewer Greg Taylor actually got into the bee suit [at The Fir Farm] and harvested the honey! And now they’re putting in 80 more beehives for us so we can produce two or three times as much beer next year. And while we were out there, a farmer showed us a bush of wild wineberries. So we harvested a bunch and made a Wineberry Witbier, our Source of Wit beer conditioned with the wineberries. It sold out in three hours! TH: Is there any way to source basic beer ingredients—grain, yeast, hops—locally?
PP: There are four hop farms in Colts Neck! We’re able to use those, typically only in August or September as they don’t pelletize or have machinery to support beer throughout the year. But we’ve found some gems in New Jersey. One of them is Rabbit Hill Farms in Shiloh. They do their own floor malting. We’ve been able to produce a few beers using 100 percent Jersey grown and malted grain bill—barley, wheat, spelt, even buckwheat. We’ll always have at least one all-New Jersey-sourced beer. We have another coming up where we’re working with a supplier, Al Buck of East Coast Yeast, who’s harvesting New Jersey yeast for us. That’s going to be a saison in American oak.

TH: I read Fizzics could convince a brewer his beer tasted better coming from it than his own tap. Is it safe to assume you incorporate the Fizzics technology at the brewery?
PP: Yes, we’ve modified the cartridges so we’re able to give a very specific density of foam, which will translate how the fifth cranial nerve perceives the beer. This was the foundation of what we created at Fizzics. Because 70 percent of flavor perception comes from aroma. It’s critical. And aroma in beer is derived through volatile ester compounds, which are trapped and released through foam, so a great head of beer is critically important to experience. Years ago, we found that, yes, you can get foam by pouring with vigor, but it has a negative impact—it’s dry, tastes grainy, and dissipates quickly. We create a wet foam that’s very dense and has a very full body, almost a creamy sensation. And it lasts.

TH: A lot of people associate “craft beer” and breweries with a heavy emphasis on stuff like IPA, Imperial stouts, sours, etc. But you guys also emphasize lagers. Why?
PP: You cannot hide behind a lager. A lager will truly showcase the talent and level of focus in your brewery. You can produce an okay base-beer and throw a whole bunch of “cheater hops” in—Galaxy, Citra, Mosaic. With a lager, there’s nowhere to hide. And that’s what we drink! Myself, Jeremy, Greg, all the brewers, we drink lagers. And for non-craft beer drinkers, drinkability is something winning a lot of people over. Ale is too bold. There’s too much going on for a first-time transitional drinker.

TH: It’s early days yet, but it seems like your beers would be a natural match with chefs?
PP: We are working with a few chefs. We’re going to have an announcement in a few weeks; we’re working with a local, I guess you’d call him “celebrity chef.” We’re working with him to create beer pairings which will be featured in his cookbook this fall. And we’re looking to integrate our beer in his establishments, although at the moment, we’re not ready for that.

TH: You guys are super-local—does that mean no statewide distribution or retail?
PP: We built the business based on our capacity and our ability to deliver something truly unique to the marketplace. The intent is not scaling to be a state-level or regional or national brand. We’re trying to be us. When we do have the opportunity to distribute, I still think we’re going to be distributing hyper-local, maybe a 10-mile radius beyond the brewery.

And retail isn’t the model we created. We’re really focused on guiding the experience of our beer. It’s difficult to do that when you put your product on a retail store shelf. I’m not ruling it out forever and ever! We’re on training wheels right now. We’re going to take it real slow.

The Taproom at Source Farmhouse Brewery is open Tuesday through Sunday, from noon to 10pm. They don’t have a food program currently, but they have a bring-your-own food policy. As for upcoming Oktoberfest, Petracca says their starts the third week in September, per the “traditional German calendar.” We’ll have three lagers on tap, plus a special beer made in conjunction with the original owner of the farm Source is now located on. “He has another farm a stone’s throw away where he grows heirloom Indian corn. We’re doing a harvest ale using his corn in our beer.”