At Felina, the open kitchen is a blur of activity. It faces the bar, the social hub of the restaurant. Photo by Morgan Ione Yeager

It’s a golden age for New Jersey restaurants. So golden, that last year we increased our annual list of the state’s best restaurants from 25 to 30 positions. This year, we held the line at 30, but included on the list seven restaurants that did not earn the Top-30 distinction last year.

Choosing the best restaurants in NJ each year is a challenge. For you, the reader, choosing which ones to try first, might be even tougher. (See the winners of our 36th Annual Jersey Choice Restaurant Poll here.)

“I’m oceany in summer and gamey in the fall,” Kevin Kohler says of his menu moods. After 34 years running this relaxed yet elegant BYO, the 62-year-old is entitled to his whims. They have produced generations of regulars who delight in his New American creations with French and Italian accents. Dishes like filet mignon ravioli or duck with ginger and lavender honey never lose their appeal. This summer, he intends to “get more into the ocean, with tartares and ceviches and poke. I want you to feel like you’re on vacation here.” Ease into one of the two gracious dining rooms and skip the airport security lines, at least for an evening. BYO
130 E. Main Street, 201-934-0030 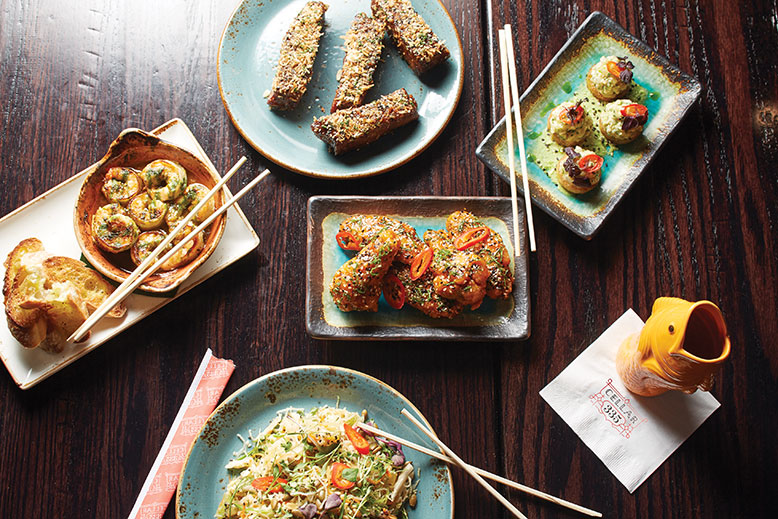 Jamie Knott’s basement boite keeps freshening its tiki-themed vibe and #letsluau cocktails without sinking into kitsch. He is correct that “the food is better than it has to be, and better than it’s ever been.” Crispy pork ribs with coconut, sesame and barbecue sauce have never left the menu, for good reason. Knott and chef de cuisine Jared Bane keep adding mad-scientist creations like Brocc-amolé: a purée of smoked guac, roasted broccoli and edamame, given crunch with whole edamame and roasted broccoli, and tang with brûléed goat cheese. For a literal cellar, 335 offers inordinate comfort, along with drinks in gonzo skull mugs and the like. These go down easy, but pack a punch.
335 Newark Avenue, 201-222-1422

The haughty, haute French restaurant is a dinosaur. But modern French cooking is alive and agile at Chez Catherine. So are the charm and warmth the late Catherine Alexandrou brought to the restaurant when she founded it in 1979. Owner Stephane Bocket, maître d’ Robert Madden and chef Christine Migton are fully in sync. In a comfortable, home-like dining room, where white tablecloths bespeak hospitality rather than hauteur, Bocket and Madden are alert to your needs, but not intrusive. Migton’s food, from duck breast with raspberry coulis to Dover sole filleted tableside, is sumptuous and satisfying, light enough to leave room for her classic desserts. Soufflés, worth the $5 upcharge, may be the gustatory equivalent of sailing in a balloon over the Seine.
431 North Avenue West, 908-654-4011 Since opening in 2016, Common Lot has refined its marriage of French technique and Asian flavors. “We’re making dishes more simple, but more punchy in flavor,” says chef/co-owner Ehren Ryan. Punchy but not so simple is the torched avocado, a salad in which the flamed fruit is elaborated with sliced beans, almonds, puffed rice and a chipotle dressing that leaves a flicker of heat. The protein of the moment here is smoked, dry-aged roast duck. It comes with crunchy Thai eggplant, peanuts, pineapple gel and a red curry sauce made with duck stock and coconut milk. In another deft pairing, roasted and pickled beets mingle with chunks of tender lobster and contrasting dots of beet purée and perky chamomile gel. Similarly striking is the parfait: two layers of frozen mousse, one pineapple, one licorice, with grilled pineapple and macadamia nuts. Turns out licorice loves pineapple. Makes sense when you think about it, but only Common Lot did. BYO
27 Main Street, 973-467-0494

Though she’s won two James Beard Awards, Maricel Presilla constantly pushes forward. Or in this case, backwards, at least in time. “I’m going more plant focused,” she says. “Not just for health reasons. Latin American cuisine was very plant focused until the Spaniards arrived with their cows and pigs.” Cucharamama’s pineapple and pumpkin salad, with its contrasting flavors and kissing-cousin textures (compounded by pumpkin seeds), shows how gratifying plant focused can be. Meat eaters, don’t lose heart. The beef and chicken pot pie might flummox Fannie Farmer with its barely-there corn crust and subtly spiced, finely ground filling, but in the dish’s native Chile, Fannie Farmer is no household name. The Ecuadorian seafood stew in spicy coconut sauce not only has fervor—it feeds two.
233 Clinton Street, 201-420-1700

Related: The 22 Best Restaurants in Cape May

When you settle into an armchair at one of the well-spaced tables in the spare, high-ceilinged room, the neutral colors soothe the day’s jitters. From the open kitchen, chefs bring food—à la carte or from a tasting menu—to your table and explain its elements. In this rarefied environment, you expect the soundtrack to be zenlike. The volume is low, but the music is kick-ass rock. As your meal progresses, you realize how well the tunes fit the food. Combining ancient techniques with the state of the art, chef/co-owner Scott Anderson and chef de cuisine Mike Ryan produce food that is not just thought-provoking, but to use a rock term, mind-blowing—in flavor and composition, each course distinct. It’s some of the most advanced cooking in the state, but as the soft-spoken Ryan puts it, “Elements is only aiming to be a fun place to eat.” In its own patient, esoteric way, Elements is one heckuva playpen.
66 Witherspoon Street, 609-924-0078 While running four properties, including two wedding venues, chef Ryan DePersio has kept his 16-year-old flagship, Fascino, aloft by building a strong team. The lead cook, Reyes Toxqui, for example, started 12 years ago as a dishwasher. And Fascino has kept ahead of culinary trends. Thirteen years ago, before it was trendy, DePersio launched Fascino’s vegetarian tasting menu. You don’t have to be vegetarian to avidly polish off the mascarpone and local-mushroom agnolotti with marsala glaze. DePersio has a Florida connection that brought juicy softshell crabs to Fascino back in April, before almost anyone else had them. As ever, his mom, Cynthia, creates fetching desserts. All in all, says the chef, “it’s an amazing group effort.” BYO
331 Bloomfield Avenue, 973-233-0350

Anthony Bucco has led several top restaurants in the state, most recently Latour at Crystal Springs. But until he opened Felina in January, he had never been an owner as well as the chef. Being Italian, he says, he wanted to “create an Italian restaurant that didn’t line up with perceptions of Italian restaurants in North Jersey, but built on my strength in local, seasonal, contemporary cooking.” Felina does that. From day one, he and co-chef Martyna Krowicka were deluged. Looking back, Bucco says, “we had to learn how to be busy before we learned how to be special.” They’re learning. Felina boasts a dramatic space with a major bar scene, terrific pastas and fish crudos, and a nose-to-tail approach to pork that pays off in a variety of starters and mains. If there’s a signature dish so far, it’s seared scallops with oyster mushrooms, roasted sunchokes and brown butter. Not your nonna’s Italian, but delizioso.
54 E. Ridgewood Avenue, 551-276-5454

The Frog and the Peach

If Bruce Lefebvre sounds chipper when he says, “Our clientele is getting younger,” it’s because that was his intent. The F&P, founded in 1983 and taken over by Lefebvre, its chef, in 2012, is one of the longest-running exemplars of fine dining in the state. Lefebvre has been grooming a younger generation of cooks, chefs and managers and channeling their energy to serve a younger clientele. The leafy garden room and clubby dining room look the same, but the food and drink are irrepressible. A wasabi-edamame purée perked up a recent Jonah crab salad. A lamb’s-tongue gyro with feta on pita was a delicious hoot. For eaters of any age or temperament, the balsamic-marinated hanger steak with green peppercorn Cognac sauce is a Rushmore of beefiness—and a steal at $22.
29 Dennis Street, 732-846-3216 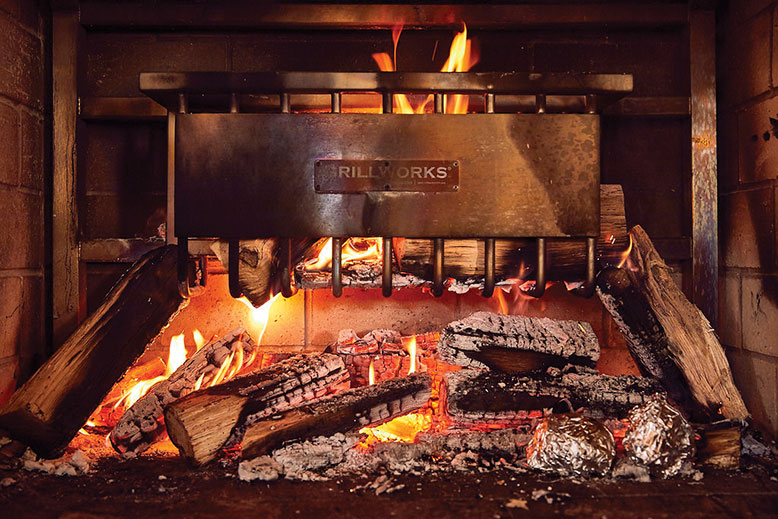 The beating heart of Hearthside is its side-by-side wood-burning oven and grill, which you can see through the glass walls before you even enter. Inside, your nostrils will pick up what chef/co-owner Dominic Piperno calls “the singe.” (Don’t worry, the place is well ventilated.) While the fire is literal—cooking superb steaks, fish and vegetables—it is metaphorical, too. “The energy [in the open kitchen] is terrific,” Piperno says. “We’re all flowing, all on the same path.” The brilliance of Hearthside lies in its balance: The smoky signature of the wood-fired dishes and the finesse and imagination of the salads, pastas, crudos and desserts. The latter group include a juicy hamachi crudo with rhubarb, macerated strawberries and chili; delicate agnolotti filled with smoked celery root in brown butter with black pepper and chopped almonds; a graham-cracker-crusted strawberry ice cream bar on a stick that is as delightful as it is whimsical. For the full experience, sit at the counter. You’ll be close enough to high five the chefs. Odds are you’ll want to. BYO
801 Haddon Avenue, 856-240-1164