This article, originally published in August 2018, has been updated.

Seven years after Cape May Brewing became the first production brewery at the Jersey Shore, the rest of the oceanfront has caught up. With craft breweries and brewpubs now dotting almost the entire Jersey Shore, it’s easy to sip local suds at the end of a sunny day at the beach.

Here are 30 Jersey Shore tasting rooms not to miss, presented from north to south.

Kane Brewing
1750 Bloomsbury Avenue, Ocean
Judged by a New Jersey Monthly panel of beer experts as the state’s best brewery, Kane is revered for its impeccably brewed beers, from its flagship Head High IPA to rare releases of its A Night To End All Dawns imperial stout. Because owner Michael Kane built his taproom before state law allowed for pint sales, his staff drags picnic tables and barrels into pretty much the middle of the brewery for people to sample during post-brewing hours. Visiting? Be prepared for long lines and scant parking. 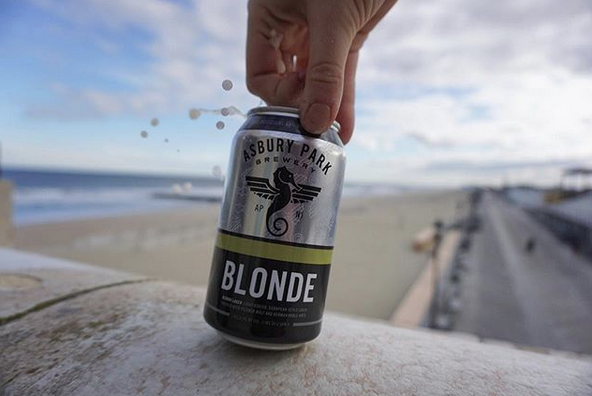 Owned by rock music professionals, APB kicks it up to 11 with live concerts in their large space. Recycled pallet furniture, discarded corrugated metal, photos of rock stars drinking beer and lighting made from crate boards extend the rock ‘n’ roll vibe. Beers, on the other hand, are less cutting edge, with malt-forward traditional styles playing lead.

Bradley Brew Project, Bradley Beach
714 Main Street, Bradley Beach
The husband-and-wife team behind this tiny brewery craft what they call “approachable ales and lagers,” meaning you won’t likely find a high-alcohol or overly complex brew. What you could find when we checked in this summer was one stout, one hefeweizen, one low-ABV ale made entirely with New Jersey ingredients, and seven pale ales and IPAs, ranging from an unusual oatmeal pale ale and a hazy gluten-free agave and pineapple pale ale to the Pina Colada IPA brewed with pineapple and coconut. No dogs allowed in this lightly post-industrial tasting room.

Little Dog Brewing
141 Steiner Avenue, Neptune City
When she started brewing in 1996, Gretchen Schmidhausler became New Jersey’s first female brewer, and when she opened Little Dog in 2014, she became the state’s first female sole proprietor. In the brewhouse behind her cozy tasting room, Schmidhausler brews more German styles than do most American craft brewers. She rounds out her half-dozen taps with mostly classic interpretations of styles from around the brewing world. A selection of beers awaits tasters at the Beach Haus Taproom. Photo by Joe Polillio

The Beach Haus boys waited approximately 10 years after launching their contract brewing company to build themselves a brick-and-mortar facility. In doing so, they revived the site of downtown Belmar’s circa-1950 Freedman’s Bakery, which had closed a few months prior. Wood salvaged from the bakery lives on in the tables and bartop and in the retail shop furniture. Bakery founder Herb Freedman lives on in Beach Haus’s Herb’s Rye, a tribute to his beloved rye bread. By decking out their storefront tasting room with broken surf boards, distressed wood and bright blues and greens, surfers-turned-brewers Nick Jiorle and Bert Roling have provided constant reminders that you’re at the beach. They enjoy their beers like their waves: big and bold, though they offer some shelter in the form of a few easy-drinking Belgians.

Frye Brewing
2257 Bridge Avenue, Point Pleasant
Most of the 11 beers on tap at this husband-and-wife brewery come in under 6 percent ABV and stick to traditional brewing styles, though owners Colleen and Mike Frye surprise patrons with fun one-offs like the red ale brewed with blood orange and Celtic sea salt; the pineapple pilsner; and the jalapeno stout. Prepare to mingle with like-minded strangers at the communal tables during a casual post-beach visit or a mellow live set of music.

Icarus Brewing
1790 Swarthmore Avenue, Lakewood
Head brewer/owner Jason Goldstein has worked in beer since he was 18. When it came time to open his own brewery, the native New Yorker set his eyes on New Jersey. Goldstein’s beer knowledge is on full display at Icarus, where he crafts IPAs, stouts, pale ales, triples and farmhouse ales—some of which are barrel aged. Icarus’s eye-catching labels stand out in a crowded beer fridge. Their most desired beer, the Yacht Juice Imperial IPA, is citrusy, creamy and crisp. The brewery’s tasting room is a popular hangout spot, and often hosts food trucks. Four-packs are available inside the tasting room and in stores around the state.—SV

Heavy Reel Brewing
613 Boulevard, Seaside Heights
A fish motif connects Heavy Reel to the ocean one block away. Wall-mounted catches, a bright blue undersea mural and photos of anglers bait guests to taste the salt in the air while they sip an oyster stout made in partnership with the Barnegat Oyster Collective, or a Jamaican coffee stout aged in an old rum barrel. Check Facebook before visiting; the brewery’s minuscule 2.5 barrel capacity (1 barrel=31 gallons) means all beers sometimes sell out before regular weekend hours are over.

Toms River Brewing
1540 Route 37 W. Toms River
Under new ownership since August 2018, the former Rinn Duin Brewing unveiled its new name and new ambitions in April.  The toasty St. John’s Irish Red Ale remains the flagship but the brewery is promising an expanded, more diversified lineup, with more IPAs, plus limited releases and themed beers—like the current Cranberry Summer Blonde Ale. There are always eight beers on tap in the comfortable, tavern-like taproom, which is due for expansion this fall.—Ken Schlager Army combat vet-turned-brewery owner Torie Fisher actively promotes the interests of veterans and first responders by hosting fundraisers, donating to related charities, running the Arms to Artisans job-training foundation and creating a comfortable space for vets and their families. As New Jersey’s first brewery owner or head brewer to earn a prestigious international Cicerone certification for her beer knowledge, she works overtime to make sure every curious drinker leaves her tasting room a more informed drinker. Expect to find beers made in tandem with other vets, like the STFU coffee pale ale brewed with veteran-owned Jersey Devil Java, based in the Camden County town of Berlin. With about three dozen beers on draught, ManaFirkin may win the award for having the widest taproom beer selection in the state. Sample them while surrounded by a beachy vibe denoted by exposed wooden ceiling beams, surfboards and a helpful sign showing how many steps it takes to get to the bar, bathroom, etc.

Ship Bottom Brewery
830 N. Bay Avenue #23, Beach Haven
You might feel like you’re walking into a trendy waterfront restaurant rather than a 2-year-old craft brewery when you climb the steps to Ship Bottom’s spacious second-level brewhouse and tasting room in Long Beach Island’s touristy Bay Village. Smell the sea breeze wafting in through the large open windows and “washing” the wooden walls with ocean character while you jam to live music featured several times a week. Beers span the spectrum, from a Mexican-style pale lager brewed with Barnegat Bay sea salt and lime to a rich coconut porter.

Pinelands Brewing
140 S. 7th Avenue, Little Egg Harbor
Feeling more like a beach shack than a brewhouse, this tiny nano-brewery adorns its walls with art for sale and stickers from breweries around the world. Piney pride is evident here, with names reflective of the area; water drawn from the Kirkwood-Cohansey aquifer; and when available, ingredients sourced locally. Though kids must stay with their chaperones, they can drink root beer brewed on site.

Hidden Sands
6754 Washington Avenue B, Egg Harbor Township
The layout of tri-level Hidden Sands impresses many a new guest for its imposing size, two bars and towering ceilings. With two mezzanines that overlook part of the brewhouse and a back room open for private events and regular tasting hours, the brewery has a space to fit many different moods. Brewmaster Luke Lindsey brings his expertise from numerous prestigious out-of-state breweries to produce lagers, dark ales, hoppy IPAs and fruited sours. As the only brewing facility in Atlantic City, this 20-year-old brewpub attracts hoards of conventioneers, shoppers and beach-goers who want a beer and a bite a few blocks from the casinos. As such, beer styles cater chiefly to the uninitiated but any visitor can expect a solid meal and memorable experience. Pro tip: it’s best to visit when there’s not a lunch or happy hour crowd spilling over from the convention center next door.

Somers Point Brewing
705 West New York Avenue, Somers Point
Opened by six friends in April, Somers Point Brewing—also known as SoPoBrewCo—is one of the latest breweries to debut at the Shore. They turned the old Somers Point Ice Company building into a bustling craft brewery, featuring a cozy tasting room that overlooks the brewing facilities. Beers, which include a great session IPA, refreshing sour, and a popular New England IPA, are available in 4-ounce tasters and 16-ounce drafts, plus crowlers and growlers to-go.—SV

Ludlam Island Brewery
9 Stoney Court, Ocean View
When Ludlam Island launched in 2016, it came out strong with an impeccable New England IPA. Two years in, IPAs dominate almost half of its eight-tap list, though low-ABV English and German styles hold their own, too. The brewery rents private space for parties at a low fee and opens every day to the public from noon to 8 p.m.

Avalon Brew Pub
7849 Dune Drive, Avalon
This year-old brewpub offers safe harbor for the yacht-club crowd. Nestled into a corporate beachfront resort, this beer-centric restaurant is differentiated from most other brew pubs by its carpeted floor, leather chairs, cloth napkins and tables set with wine glasses. Though brewers make five approachable year-round beers, craft snobs may shy away from the macro- and safe-craft bottle list. Open for breakfast, with wine and cocktail menus available.

7 Mile Brewery
3156 Route 9 South, Rio Grande
Clean lines and a lack of visual clutter define this function-over-form, sea-blue tasting room, whose seating space is enhanced by an outdoor beer garden. Listen to live music on weekends while sipping on a seasonal pear wit or an uber-bitter IPA that adds hair to your head with 100 international bittering units on a scale of 100. Open daily. The first production brewery at the Shore, Cape May has expanded what seems like a zillion times since opening in 2011. In its latest iteration, visitors can chillax in the Brewtique gift shop or large tented beer garden after taking a self-guided or guided tour of the sour brewery or the main production floor, located in a nearby building on the grounds of Cape May airport (free, daily). With 12 beers on tap at all times, almost anyone can find something to like. Open daily.

Cold Spring Brewery
733 Seashore Road, Cape May
Can we talk? It’s common knowledge among South Jersey beer drinkers that the beers here won’t win any awards. Despite that, we encourage you to visit Historic Cold Spring Village’s 4-year-old brewery, which interprets 19th-century recipes on a glorified homebrew system to (theoretically) raise operating capital for the non-profit open-air living history museum. Well-intentioned brewers do the best they can with what they’ve got, and it’s definitely fun to explore the circa-1804 barn that houses their rudimentary workspace.